The 2015 version (old formula) was the first sunscreen I ever tried. My skin is oily and acne prone, I started wearing sunscreen frequently since 3 years ago. Most sunscreen I tried always have the same problem, it was super greasy, sticky, feel thick on the face, does not absorb to my skin and leave a strong white cast. When I heard about Japanese sunscreen that is lightweight and not greasy, I immediately purchase it. I fell in love with biore watery essence, just like a lot of people did. It was a quite versatile sunscreen for me, it is good on its own, under makeup and even to reapply on top of another sunscreen in the middle of the day. I use the biore perfect milk in the morning, and reapply it with biore watery essence a few hours later. That sunscreen layering did not break me out at all; a little bit shiny throughout the day and that is not a problem for me. I was so happy to have this dynamic duo protect me daily from UV ray. I even use it to go to the gym and it was all good.

Then came the new reformulated biore watery essence. There are a few difference that I notice:

Old packaging is in light blue color. There is a slight citrus smell. The texture is light and a bit runny. It dried out quickly. When I wash my face with water, it will melt a little bit (I see the water turns white but it doesn’t wash off completely).

The new packaging is in a beautiful ombre blue color. There is no smell. The texture is still light but not as runny. It also absorbs quickly. There is no residue when I wash my face with water (since the new version is waterproof). Overall, it feels similar to the old version, but the new formula makes my skin more oily throughout the day. 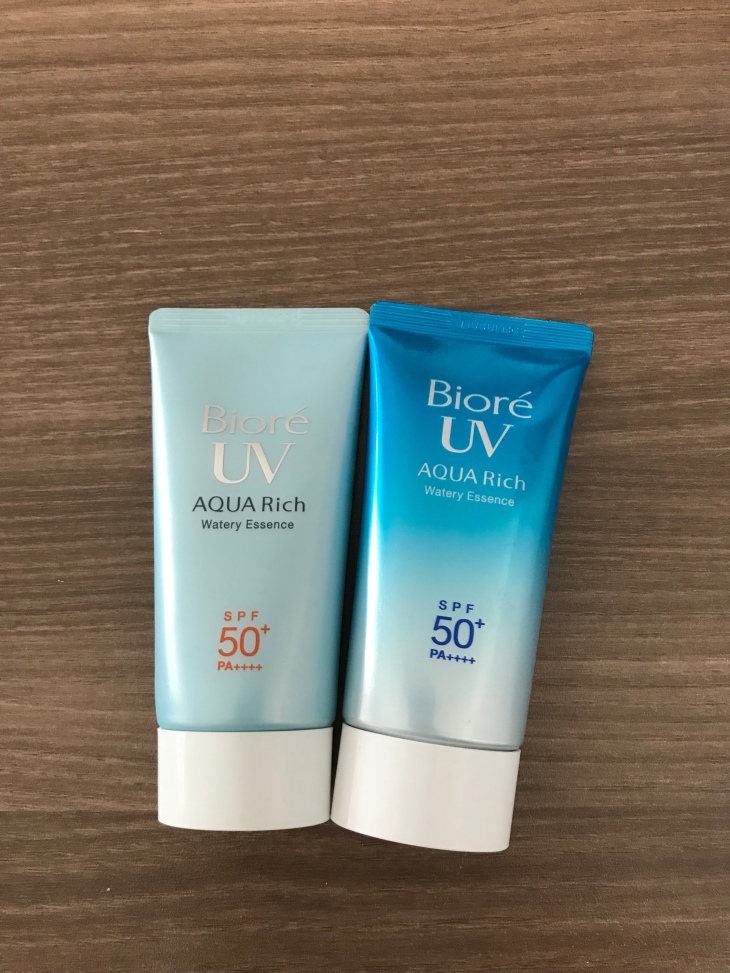 I don’t mind the new biore watery essence texture. There is no annoying smell. It is also waterproof. But why fix it if it is not broken? What I really bother me is that it broke me out. The first time I tried it was on its own, without wearing any makeup; I also reapply the sunscreen a few hours later. By the end of the day when I am cleaning my face, I notice a bump (soon to be cystic acne) on my right chin. I thought “Oh maybe it is because I am on my period”. About a week after that, my period is over and I tried the sunscreen for the second time. I made sure there is no new acne on my face before putting on that sunscreen again. This time I used biore perfect milk in the morning and 4 hours later reapply with the 2017 biore watery essence. Then the same thing happens, at night suddenly a painful bump appear on my left chin. So now I have two cystic acne on my chin.

Now I really hope they will never reformulate my other favorite sunscreen, the biore perfect milk. Ah…. the memory I have of 3 years using the old version make me sad, it is time to say goodbye. Now I need to start finding new sunscreen to replace my long last love.